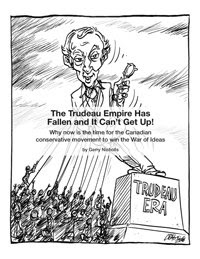 I have written a short political tract called The Trudeau Empire Has Fallen and it Can't Get up: Why now is the time for the Canadian conservative movement to win the War of Ideas.


I am hoping this little manifesto will help other Canadian conservatives learn from the experience I gained after fighting in the political trenches for 22 years.

The booklet talks about how to package a conservative message and about how to get around the roadblocks we face.

My main thesis, however, is that now more than ever Canada needs a strong and vibrant small "c" conservative voice.
You can read my opus here, or I would be happy to email the PDF of this document to anyone who requests it. Here is my email address: gerry_nicholls@hotmail.com
Posted by Gerry Nicholls at 10:12 AM

I have just got up to 'Road Block to a Revolution', but I had to comment on the previous section.

For the most part it was an excellent examination of the issues those leaning towards the right must be aware of.

However, I think you missed the point in the environmentalism section. While there are many questions to ask regarding climate change, the state of the science thus far is accepting at least some anthropogenic influence. By not recognizing this we allow the left to monopolize the options for dealing with climate change.

The environmentalism section should have delt with how increase property rights and targeted 'stick and carrot' measures from government can make it easier for buisness and individuals to act more environmentally friendly, and live more sustainably.

Conservatives can protect the environment by making it easier (tax credits) to choose environmentally options. Something left is generally not willing or able to do.

I read the first sentence:

With you so far.

That's why it's so important for Canada's conservative movement to win the war of ideas, ...

Okay, you lost me. The first sentence are not conservative ideals, but libertarian or classic liberal ones.

Granted, conservatives have slowly subsumed much of classic liberalism, as modern liberals have abandoned it for progressive policies.

But is it now official? Is conservativism now just another word for classic liberalism? And how will the inevitable clash with social conservates be handled?

How is the belief in free markets incompatible with (for example) the belief that life begins at conception? Or that marriage should be defined as a union between a man and a woman?

This sums up conservative failure in a nutshell. While every other ideology is concerned with trying to make Canada a better country, conservatives are only interested in convincing everyone that they are right regardless of whether or not their ideas are beneficial to the country or even grounded in reality.

The clash is between individual freedom and social conservatism.

Social conservatives often want to restrict or outlaw ponography and prostitution. People of libertarian bent often contend that that's none of the government's business.

Aside from the abortion and marriage debate, which I find to be black and white, I find myself torn on some of the other issues.

I would ask you though, what are your thoughts on legalizing all forms of drugs (assuming a private healthcare system where a drug addict would have to pay for his own care)?

... Excellent Gerry... many thanks!
... Perhaps, true liberty refines down to two central principles- both linked.
... One is the freedom to trade- to offer one's goods or services on one's own terms (including a position of employment). However, environment and legal concerns are rightful and necessary restrictions.
... And, the freedom to live without the state forcing money from some to give to others- the communist, interventionist role of government.

To be fair to the Conservatives, Gerry, probably NOT "now, more than ever.."

"The fact is Canadians are neither 'right wing' nor 'left wing.' Rather, they are simply looking for ideas that work."

That was actually the best sentence of your opus!

I no longer believe in "isms" of any kind.

BTW Celebrating the "conservative noisemakers" in the USA (ie. Fox News and Rush Limbaugh) what the heck was that all about?

There doesn't seem to be many real conservatives currently associated with the GOP either...

Generally a good article, but I would argue they are some errors too. I agree with Rabbit that social conservatism and libertarianism really have little in common. They have only formed a common cause in the United States due to their strong dislike of liberals, but in Canada there is little evidence of that happening. They seem to hate each other more than the left.

Also, I think comparing to the United States is somewhat risky. While it is true the left was very successful up until the 70s, Americans by nature tend towards conservatism so its like kicking over an empty bucket, as soon as someone took them on, they fell apart. The US was created by a revolution on the belief that a government far away wouldn't make the best decisions for one. Many of its immigrants came from dictatorships where government had too much power, thus the idea of less government had a strong appeal. Essentially, smaller government was part of the country's history so an easy sell.

Canada is quite different in that we were founded by the French and British in terms of those who influenced modern Canada. The French had strong ties to the Catholic church which is quite hierarchical and about authority. After the Quiet Revolution, the power of the Catholic church was reduced and instead replaced with a large interventionist government. The first British settlers were mostly Loyalist from the United States who opposed the Republican ideals and belived in the idea of peace, order, and good government. Unlike the immigrants in the United States who were mostly escaping oppressive dictators, most in Canada were economic ones who came due to better economic opportunities. These were often people from the lower class so the idea of socialism which appealed to helping the little guy and a more just society was strongly appealing.

Since our culture is very much based on the idea of a strong government, challenging this is a lot tougher as it goes against the Canadian psyche.

The best way to challenge it in Canada is to show the results of a tolerant, equal, and just society are better achieved through more individual freedom and free markets than an activist government.

As for the topics mentioned, some are really non-sellers. Reducing the power of the CRTC makes sense, but scrapping it outright is plain stupid. One of the roles of the regulator is to ensure each frequency is protected within each market and that others don't go cutting into other's frequencies. The CRTC surely should at least perform this role.

As for the CBC, the reality is there is not a single developed country that doesn't have a public broadcaster. Even Margaret Thatcher who as a big time privatizer left the BBC alone.

That being said, Gerry should be given credit for at least trying even though he is probably being a bit unrealistic, but just maybe going too far might lead to a government moving in that direction. After all, no government has adopted free markets to the extent the Fraser Institute advocates, but the Tories under Mulroney and Liberals under Chretien at least adopted some of their ideas (i.e. Free trade, balanced budgets, tax cuts, privatizing some crown corporations).