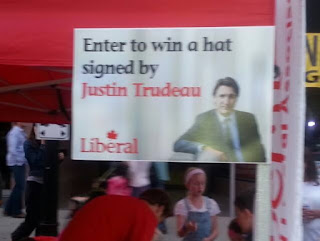 While strolling down a downtown street festival recently I spied a little sign, taped to a Liberal Party recruiting booth and it immediately caught my attention.

It read: “Enter to win a hat signed by Justin Trudeau.”

Why, I wondered, would anybody consider a hat signed by a politician to be a prize?

Then I remembered, Liberal leader Justin Trudeau is no ordinary politician, he’s much more important than that – he’s a celebrity!

He has a famous, former prime minster father; he has matinee idol good looks; he once pummeled a Conservative Senator in a boxing match, all of which makes him one part handsome prince; one part pop star; one part action hero.

This is why much of the media has bestowed upon Trudeau the kind of fawning coverage usually reserved for visiting royalty (such as Barack Obama) or for Rock stars promoting some trendy “celebrity-backed” plan, usually involving creative Twitter #hashtags, to end African poverty.

And make no mistake, celebrity-hood matters politically because in our modern, hi-tech, secular society, celebrities are the closest thing we have left to gods.

We see celebrities as heroic, glamorous, adventurous, beautiful, rich, privileged -- everything we aspire to be.

So we idolize them.

We buy the hemorrhoid products celebrities endorse; we dress (or in some cases undress) like them; we soak up their every word when they lecture us on the finer points of our national energy policy.

We even try to connect to them on some supernatural level by owning items they may have touched or signed, just as our ancestors in medieval times sought out holy relics, which is why people might covet an autographed Trudeau hat.

Part of this worshipping process includes transforming our celebrities into idealized versions of humanity.

After all, what’s the point of paying homage to a regular schmuck?

So it is that Trudeau’s celebrity status also confers upon him the aura of a perfect politician, a leader who is imbued with positivity and idealism, whose motives are completely pure, whose aims are utterly noble, and whose hair has achieved a divine level of flawlessness.

That’s why, unlike regular, run-of-the-mill, non-celebrity politicians, Trudeau doesn’t need policies or platforms or, you know, anything actually resembling a real idea.

Indeed, the implied Liberal “marketing” message is that Trudeau, through a combination of celebrity superpowers and Chinese-communist-style efficiency, will painlessly and effortlessly solve all our problems.

The budget will balance itself; will develop oil sands in a way that makes the air smell like roses; and once Trudeau discovers the “root causes” of evil, Vladimir Putin and ISIS will turn away from aggression and dedicate themselves to helping homeless puppies.

Who can compete with a narrative like that?  No wonder Trudeau is soaring in the polls.

Of course, somewhere deep in our hearts, we all realize the Trudeau story is really just a nice fairy tale, just as we know Kermit the Frog is really just a piece of felt with buttons for eyes.

But when it comes to Kermit and Justin we want to suspend reality.

The Trudeau fairy tale is one we especially want to believe. We want to believe there’s a leader out there who can magically make the country a better place, who can unite us all regardless of race, region or hockey affiliation, who can rise above partisan political bickering, who will let us have our cake and eat it too.

We don’t want to pull back the curtain and see Trudeau for what he really is: a likable but inexperienced, gaffe-prone politician who is probably incapable of uttering anything beyond carefully rehearsed platitudes.

That would force us to face the ugly truth: that no matter who is prime minister, no matter which party is in charge, it won't change the basic reality that politics is a messy, tough, cynical, scandal-prone business that offers no clear cut or easy answers.

Who wants to contemplate that harshness when it’s so much easier, so much more satisfying to believe in Trudeau’s rainbows and lollipops agenda?

As Oscar Wilde put it, “illusion is the first of all pleasures.”

Consequently, because it gives us pleasure, Trudeau remains firmly atop his celebrity pedestal, meaning he has a good chance of becoming our next prime minister.

Then, I guess, we will see what happens when illusion confronts reality.