On April 6, Canada lost a true champion of freedom.

You probably never heard of Alan, he wasn't a journalist or a TV personality or a politician.

He was a Calgary laywer -- and a darned good one. In fact, he was one of Canada's leading constitutional experts -- but more than that he was my friend.

Alan and I worked together during my days at the National Citizens Coalition, when the NCC actually mattered.

He was our lead lawyer in our never-ending legal battles against election gag laws, laws which denied every Canadian the right to free election speech.

For Alan, this wasn't just a legal job -- it was a crusade. He believed the protection of free expression was vitally important to any democratic society.

And for more than 20 years, he fought against gag laws with a ferocity that was a wonder to behold.

He was always confident of victory. He believed our Charter of Rights and Freedoms and our British legal tradition would never allow gag laws to stand.

He was right -- for the most part.

Alan won countless cases against gag laws. He successfully convinced the courts to overturn a Trudeau gag law in 1983, a Murloney gag law twice - in 1993 and in 1996 --and a Chretien gag law in 2001.

Ulimtately, however, even Alan, with all his logic and all his eloquence, could not convince the Liberal-packed Supreme Court of Canada to defend free speech and hence the undemocratic gag law survives.

But win or lose, Alan was a remarkable man.

I am lucky and honoured to have known and worked with such a noble and great Canadian.
Posted by Gerry Nicholls at 8:10 PM 1 comment: 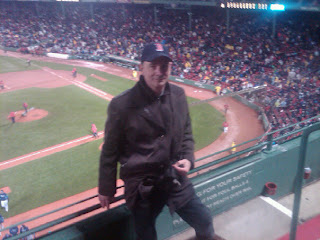 Recently had a chance to realize a dream: watched a game in Fenway Park.
It was raining and cold and the Red Sox lost (twice!) but it was a great experience.
They don't make ballparks like that anymore.
Next on my list: new Yankee Stadium.
Posted by Gerry Nicholls at 5:55 PM 1 comment:

I was saddened to learn Report Magazine is ceasing publication.

It was a great magazine that provided a strong voice for Canadian conservatism.

I was honoured to have a regular column in Report for the past several years and always found working with editor Rodney Dietzman a true joy.

Whenever I criticize the federal Conservatives for being “Liberal clones” the government’s defenders will inevitably remind me that the defining difference between Tories and Liberals is corruption.

“The Liberals are all crooks, whereas we Conservatives are all angels,” is usually the point of the argument.

Well now the sad saga of Helena Guergis has blown some rather gaping holes in that narrative.

And that shouldn’t surprise anyone.

The fact is corruption is non-partisan.

To quote Benjamin Rogge, who was paraphrasing Hayek, “honesty and integrity in government are not a function of which party is in power but of the power over economic decisions possessed
by those in government.”

My point is, the real bad guy is government, or rather the power of government.

As long as the government has the power to influence and direct our economy, corruption will be inevitable.

It doesn’t matter who is in power.

That’s why if the Tories truly want to bring about cleaner government they should first seek to reduce its scope and its power.

The less influence government has over our lives, the less temptation there will be to do wrong.
Posted by Gerry Nicholls at 11:01 AM 22 comments:

Here's the opening of a speech I delivered in December at a liberty and free speech symposium organized by the Canadian Centre for Policy Studies.

I am posting this for two reasons. First, I think it's cool how I figured out how to post an audio file; second just to let you know the CCPS is now selling a CD featuring all the speakers at the conference.

And given all the news about free speech these days, it would be a timely purchase.

You can order it here.
Posted by Gerry Nicholls at 1:42 PM 1 comment:

The federal government recently announced it was adding a bunch more seats to the House of Commons.

This brought to mind an interesting New Hampshire fact.

Did you know New Hampshire's legislature has 424 members, making it the fourth-largest parliamentary body in the world, behind only the U.S. Congress and the Parliaments of Britain and India?

Told you it was interesting.
Posted by Gerry Nicholls at 3:10 PM 3 comments: