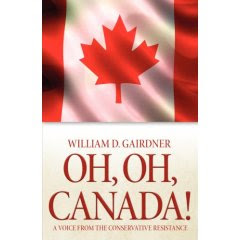 I enjoy reading books which are both intellectually stimulating and a good read. And that’s why I was delighted to come across William D. Gairdner’s latest book, Oh, Oh, Canada!: A Voice from the Conservative Resistance.

A collection of Gairdner’s essays, Oh, Oh, Canada! is a well-written, cogent, intellectual defence of Canada’s traditions, values and freedoms that conservatives of all stripes would enjoy.

From Quebec nationalism to global warming; from the politics of sex to the basis of natural law; from Senate reform to the essence of morality, Gairdner provides the conservative perspective on key issues facing this country – and he does it all in less than 200 pages.

Of course, Gairdner, the former Olympic athlete, successful businessman, academic and now political philosopher, has a good track record when it comes to skewering the Left’s arguments.

His book The Trouble with Canada, for instance, was one of the most devastating critiques of Canada’s leftist economic and political failures ever written.

But in Oh, Oh Canada!, Gairdner goes beyond politics and economics, digging deeper to explain and defend the philosophic underpinnings of conservatism while at the same time exposing the logical fallacies of the Left.

In the process, the author provides powerful intellectual ammunition to those Canadians who value Western traditions and who wish to resist those forces which seek to undermine them.

Mind you, as a libertarian I didn’t agree with some of the book’s social conservative stances, but even then I found Gairdner’s arguments provocative and thought-provoking.

Anyway, if you want a concise, clearly written yet profound manifesto of Canadian conservatism, than Oh, Oh Canada! is for you.
Posted by Gerry Nicholls at 8:09 AM

No offense intended, however

In my humble opinion, Gairdner is an extremely odd duck.

Whackos like that not only scare me, but they give sane conservatives a bad name in Canada...