Why I won't gloat

Recall that when the Tory attacks ad first came out, I gave them a negative review; "Instead of focusing on simplistic, nationalistic nonsense," I wrote, "the Tories should explain why a Liberal government will be bad government."

A few weeks after I wrote that the Tories experienced a minor upward blip in the polls, leading many Conservative Partisans to crow that the "truth ads" were working and that I was therefore all wet.

Well a couple of recent polls show the Tories are now losing ground. Does this mean the attack ads are a flop? Does this mean I am justified in saying "Hey, I told you so!"? 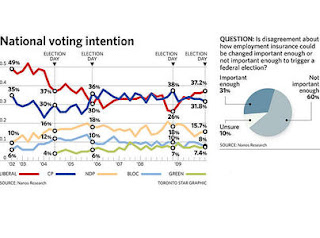 As tempting as it would be to do that, I will refrain from any gloating. After all, it takes time for these sort of ads to sink in, meaning it's still too early to pass judgement.

The fact is a good attack ad's purpose isn't necessarily short term gain. Their aim is often to sow seeds of doubt in the voters' mind; make them wary of a candidate's weaknesses.

For instance, the Tories used attack ads to suggest former Liberal leader Stephane Dion was weak and indecisive; hence whenever he displayed weakness or indecisiveness it reinforced the Tory message.

Over time voters came to buy it.

That's what a good attack will do. But I still don't think the Tory anti-Ignatieff ads are good. They are zeroing in on the wrong message , a populist, anti-American slant that just won't stick.

Oh they might work if Ignatieff is a complete idiot and he somehow manages to reinforce the Tory message, IE he starts going around whistling the Star Bangled Banner and eating caviar.

But it's likely he won't do that.

It's more likely he will spend the summer going to barbecues where he will wax eloquently about how much he loves Canada. Then Canadians won't see him as "cosmopolitan".

By the times the leaves fall in the Autumn the Tory ads will be long forgotten.

Hard to get through the leftist media. See the latest Maclean's cover with big picture of Mulroney and "Unbelievable" in big print across. Contrast this with their cover treatment of Ruby Dhalia, the woman you don't know.

PM Harper made an outstanding speech in France today. In contrast to Obama who iscan be eloquent but vapid, PM Harper spoke of the D-Day sacrifice as just the beginning of the contribution of the Great Generation and our obligation to carry on in Afghanistan and elsewhere to increase democracy and justice in the world.

But the CBC is not covering this (just on Newsworld). There was some horrendous modern opera on when I tuned in at noon today.

These ads ecco the exact same questions Liberals had about Iggy during their last real leadership campaign though, and now with Iggy taking up positions that are opposite to long time Liberal positions, that proves the questions have traction.

The Liberals have given the Tories all the ammunition they need to run a series of to-the-point ads.
The Liberals decry the deficit the government is running, yet they want more money spent on EI. They wail about the state of the forestry industry and want it rescued, yet they don't want the deficit to grow. They have said nothing about the auto bailout except that they don't want the huge deficits associated with it. They scream that the Tories squandered the budget surpluses by cutting taxes, yet they refrain from stating openly that they would reverse the tax cuts.
The Tories should be hammering on the inconsistencies in the Liberal message and their lack of alternate solutions. Go after the Liberals a their weakest point...the total inability to propose alternate solutions to any of the Tory policies that they castigate.

The "Dion Not a Leader" ads worked because many members of the caucus were anonymously telling journalists that Dion was not a leader.

I don't see a lot of MP's anonymously complaining to journalists about how terrible it is that Ignatieff taught at some of the worlds' most prestigious universities for several years. Somehow I think most liberals see an intelligent leader as a plus.

And, yes I know the ads are allegedly trying to get at the fact Ignatieff was out of the country, but in my opinion they are also trying to attract the anti-intellectuals out there. All this nonsense about drinking lattes, like that somehow matters...

I think that was their plan B. Their plan A was to bankrupt the opposition parties and that too blew up in their faces.

One of the basic flaws in the conservative communications strategy was to focus the attack on Dion instead of the liberal party.

If they make Dion out to be the reason for all the liberals problems, then the solution for the liberal party is simple; get rid of Dion.

They should have hung the liberal party with those problems. That would have accomplished two things, it would have branded the liberal party as being no good and it would have kept the weak and ineffectual Dion around for a while longer. Branding the liberal party would pay long term dividends.
And why help your opposition get rid of a weak leader and replace him with someone who can beat you?
They are doing the same thing again with Iggy.
They should be attacking the liberals for making a back room deal to get him in as leader, that brands the liberals as sneaky and underhanded.
They also should be attacking them for supporting the $1.95 coalition and tie in the fact that the separatist party gets 85% of it's funding from that measure that the liberal party introduced.
Why did the liberals introduce laws that gave federal funding to a party dedicated to breaking up the country?
I guess they needed a credible separatist dragon to slay if they were going to portray themselves as the party that could keep Canada together.

Only reason no one is complaining in the Liberal party is because they have reached the bottom of the barrel and there just is not another leader in the party.They are doomed as is Gerry with his jumping on board the good ship Liberal.You wont gloat Gerry because you are wrong and just like any Liberal,wont admit it.Iggy is american and the truth ads prove it.No attacks here folks just Gerry doing the liberal spin.

This poll was taken right after the deficit increase/auto bailout.
(notice how these polls are never taken following good news, like the 2 weeks following the Obama visit?)

And if you check out the regional breakdown, the only real movement was in Ontario (tho within the margin of error),
the hardest hit province by the recession, with Cons down 5, picked up by Dippers/Greens NOT the Libs (libs lost 1 point).

The poll it what it is.

With Obama's visit you cant eat it, smoke it, draw an income from it, reside in it, expect your kids to get a better life as a result of it or sock money into it.

The Obama visit was hype at the time but eclipsed by the recent Obama trip to the middle east.

Make no mistake Harper is no Obama.

Obama is greatness and excitement and living history in real life prime time!

Do you really believe that criticizing the PM or the Conservative party instantly makes you a Liberal?

What a simple little world you live in! LOL