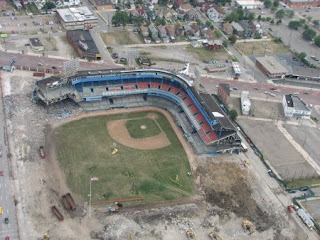 Here's a picture that makes me heartsick.

It's all that remains of that once glorious baseball temple better known as Tiger Stadium.

The stadium was undergoing a slow demolition for months, but some groups were fighting hard to save this remaining wedge from the wrecking ball so that it could be turned into a baseball museum.

Unfortunately, however, the heartless bastards at the Detroit Economic Growth Corporation recently voted to tear it down too.

It's just as well, I guess; the Old Girl should probably be put out of her misery.

Update: A judge has issued a restraining order on the Tiger Stadium demolition.

Posted by Gerry Nicholls at 2:49 PM

OMG! A post where you don't whine and complain about Harper or the Conservative government. I'm shocked!

I am sure Harper had something to do with it!

All things must past.

It is a shame. Growing up in Windsor I still have fond memories of taking the tunnel bus over the border and walking to the ballpark. Even in the early 70's it was a safe thing to do. Did this for years. The ballpark franks .. not the ones in the steamer .. no .. not those ones .. always took the ballpark franks off the grill .. with the onions. Chet Lemon patrolling center .. Tommy Brookens on the hot corner .. Kirk Gibson hitting one off the third deck .. the foul balls that always went over the roof (and wondering where the landed) .. twi-night double-headers out in the center field bleachers.

Now .. just a shell. But there is absolutely nothing growing in the area now. Not even the "spring in ... spring out" garage across the street.

I too took the tunnel bus and walked to the ballpark. Good times.

And Briggs stadium -- you are a long time Tigers fan.

When I first went there it was still called Briggs Stadium. This was in the days when George Kell played third base, Vic Wertz handled first, Pat Mullin & Hoot Evers still patrolled the outfield, and Virgil Trucks threw two no-hitters in a single season.
When I got older the name had changed and, in spite of an hour's drive, it was still a great place to go on a hot, muggy summer's night. There was always a cool breeze circulating and they served non-light beer that was always cold.
I miss it.

I too will miss her. Great stadium to watch a ball game. Much better than the Sky Dome. This was an actual baseball stadium. When I lived in Windsor in the 90's I was a student at University. I would take the tunnell bus to Detroit. In September the Tigers would be 20 games back so plenty of affordable tickets were available. I still remember the hot dog vendor selling dogs for $1. You would hand you dollar bill to the guy next to you and down the line it went. The vendor got your buck and fired the dog to you. He never missed. Never. We would then yell at him to take the mound becasue he would be the Tigers best pitcher. Got a laugh every time.