Every time one of those anti-Ignatieff Tory attack ads pops up on TV (which it seems is every five seconds) I cringe.

It’s not just the embarrassingly juvenile look of the ads which bothers me, it’s more what they say about the sad intellectual state of today’s Conservative Party.

Bereft of ideas and vision and principle, the Conservatives, desperate to hang onto power, have chosen to play the most obnoxious card in Canadian politics: anti-Americanism.

“Be warned Canada” the Tory ads imply, “Michael Ignatieff once worked and lived in the evil United States. He’s not really one of us. We even have him on tape saying `It’s your country [the US] just as much as it is mine’.”

And Prime Minister Stephen Harper is warning that he has other damaging tapes of Ignatieff.

Perhaps he has a clip of the Liberal leader eating apple pie on the fourth of July.

Appealing to anti-American sentiment, of course, is nothing new. But in the last few decades pandering to ugly the side of Canadian nationalism in this way was usually the preserve of the NDP and Liberals.

Oh and just in case the anti-Americanism of the Tory TV ads is too subtle somebody dispatched this clown to pound the message home. 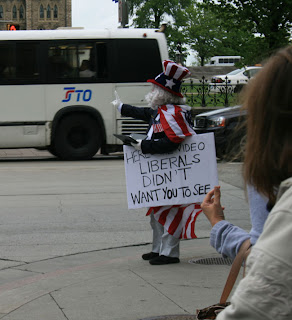 But I guess we better get used to this style of politics. With its massive deficits and corporate bailouts, the Conservatives can no longer represent themselves as a pro-free market party.

Maybe they should call themselves the Petty Populist Party.

Posted by Gerry Nicholls at 9:09 AM

I'd of thought you'd be cheering on these ads because they were SOOO not going to work. Instead, all we get is this "Tiffy over Iffy" of yours.
Your spin has gone all wobbly. That’s pretty obvious to see.

This posting is about my philosophic opposition to the ads, as a principled conservative.

As a communications professional and looking at it pragmatically I think the ads are bad messaging and won't work.

I doubt you will post this so a personal reply would be appreciated. Are you ever going to overcome your bitterness towards Mr Harper??

The emotion I associate with PM Harper isn't bitterness; it's sadness.

I'm not a fan of a lot of things that Harper has turned out to be. Far more left wing that I ever would have imagined.

The ads on the other hand, I like them. Not anti-american in the least, they just show what a blatant opportunist Iffy is. If nothing else, the ads motivated me to send more money in the party.

So would you rather have Canadians not know that the guy running for PM lived out of the country most of his life or that he considers himself an American? The MSM wont tell them so if not the CPC then who will tell them? I think it's important for people to have this info and if the media won't do it's job then somebody has to. These ads are a necessity because of the broken,corrupted media system in this country, not the fault of the CPC. Libs have a billion dollar+ /year propaganda network with the most disgusting/untruthful smears against CPC running round the clock(and hiding any Lib bad news). And it's wrong to fight back with a few small ads to counter it?
TJS

You can call it sadness, but it comes across as bitterness.
I will never forget the Liberal add pointing a gun at the viewer, or the 'soldiers in our streets' ad.
This is tame, truthful advertising by comparison.

A little honesty Mr Nicholls please, There is no anti-Americanism in the ads nor are they attack ads, they simply inform Canadians of who the Iffy one is, what he has said in the past and what he feels for Canada(nothing).

Gerry. What would you have done differently than Mr. Harper if you were PM in a minority governing situation?
Rob C

If that's the way people are interpreting the ad I would be surprised because I didn't think that was what was implied. I always thought the ad was about oportunism and how Michael had no real connection to Canada anymore, since he was ready to identify himself with another country and hadn't been in ours for so many years.If he had said the same thing on tape about britain while he was over there I would assume I would have seen that as well.

But you may be right that it was infered by some that way due to the popular obsession with the U.S., almost 100% of the newspaper & magazine reports I have read on Iggy have said he spent most of his time outside of Canada in the U.S. but he was in Britain until he moved to work at Harvard in 2000, but that is never the way it is conveyed in the Canadian Press. So there does seem to be a warping of reality in Canadian's & the Canadian Press' mind when anything about the U.S. is mentioned.

How off the hook do you think the Liberal Party of Canada, and their cheerleaders in the MSM, would be if it were Stephen Harper who had been out of the country for over Three Decades? If it was Stephen Harper who said "My America"?

I guess we could go back to the old school Conservative party way of doing things Gerry, one that was always going to take the high road, no matter that all it ever did was pave that road for the Liberals to swoop in and have a seat in the government benches..

As for whether or not it will be effective, the Conservatives have given Canadians the facts, something the MSM was not willing to do.

Gerry..What would you have done differently if you were in Mr.Harper's position in a minority government?

The voice doing them is terrible.
They sound like a school yard taunt instead of adults trying to convey a message.
The CPC communications is a complete disaster.
People will vote for good government.

Your losing it Gerry..A truth ad is not an attack ad.A big difference.And they are working because even you are talking about them.I think maybe you should join the Liberal side for awhile to get the truth ..And PM Harper will forgive you if you just stop backing him for awhile.

Would take responders more seriously if they acted like grown ups and quit using grammar school nicknames like Iffy.

Actually, I think kids are more adult than that.

There are some commentors on here who have asked you some interesting questions Gerry, please don't be like Ignatieff and just answer the ones that appeal to you.

Sorry Crash,Treb and "anonymous"..these attack ads are blatantly attempting to capitalize on anti-US sentiment. It's lame and of course lacks any substance.

It's obvious that the Conservatives cannot differentiate themselves fromn the Libs and are resorting to these panifully desperate ads.

Gerry, you nailed it again.

You’re absolutely right Platty. See below some of the questions gleaned from the various comments.

Q. Why don’t you offer unthinking obedience to the Great Leader?

A. I have not yet been assimilated into the Conservative Hive Mind.

Q. What do you have against negative ads …oops forgive me if you are reading this Great Leader, I meant to say “Truth” ads?

A. Look I have spent 20 years trying to lower the standard of public debate in this country. I wrote ads comparing MPs to pigs, donkeys and other barnyard animals. The fact is I love negative ads. What I have a problem with are stupid ads.

Q. Don’t you know the Liberals would be doing the exact same thing as the Tories if they were in power?

A. Yes I know, that’s what bothers me.

Q. How do you keep your boyish good looks?

A. Stop it. You’re making me blush!