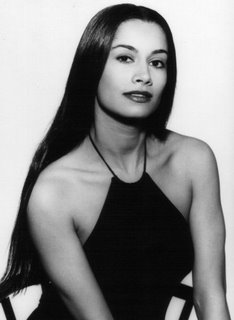 This is Govindini Murty, a charming and lovely actress/producer/conservative I had the pleasure of meeting recently at a convention in Ottawa (who says these conventions are boring).

And not only is Murty beautiful, she’s also quite perceptive, since she agreed with me when I pointed out to her the similarity in looks between me and Tom Cruise.

So when she sent me an email asking me to help with her pet project – the Liberty Film Festival – how could I refuse?

The Liberty Film Festival is Hollywood’s first conservative and libertarian film festival which aims to provide a greater diversity of viewpoints in Hollywood.

In other words, it aims to challenge the Hollywood Left’s attempts to undermine our Western values and the War on Terror.

The next festival will take place in Los Angeles this fall and if you can’t make it but would like to financially support the festival you can do so here.

Tell them the “Tom Cruise-look-alike” sent you.
Posted by Gerry Nicholls at 9:25 AM