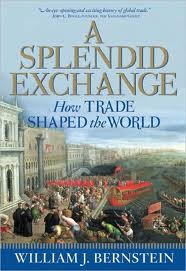 Given all the publicity the anti-Globalization rioters get these days, it might surprise you to learn that in early nineteenth century there were actually riots demanding free trade!

That’s just one interesting little historical tidbit I discovered while reading A Splendid Exchange: How Trade Shaped the World, by William J. Bernstein.

The book looks at the history of international trade, from the times when cavemen exchanged seashells for antlers to today’s debates over globalization.

And at the risk of sounding like some sort of ubergeek, let me confess I am finding it to be fascinating reading.

Especially interesting is learning how governments through the ages sought to squelch international commerce, usually at the behest of some special interest group.

For instance, in seventeenth century when the East India Company started importing cheap cotton the resulting competition hurt domestic wool weavers, who demanded Parliament do something.

Sounds like the kind of ideas Ontario's Premier Dalton McGuinty would consider.

Fortunately, these measures were shot down. (Hurting the chances of these bills passing were East India Company bribes which ended up in the pockets of key members of the House of Lords.)

One bill, however, did pass in 1678 requiring the dead be buried in wool!

The next British protectionist surge was a lot less comical.

In 1815, at the behest of the landed aristocracy, Parliament created a series of “Corn Laws” designed to keep foreign grain out of and therefore keep grain prices artificially high.

As Bernstein notes, “Protectionist legislation usually strikes at the weak and powerless and the Corn Law of 1815 was no exception.”

Indeed, the price of bread skyrocketed meaning the poor could not afford to eat. Hence the riots demanding free trade.

Eventually, powered by the pro-free trade ideas of Adam Smith and others, a new group of leaders emerged in who thankfully for hungry Englishmen overturned the Corn Laws.

But, of course, the fight for freedom never really ends.

There will always be protectionist politicians, business leaders, big union bosses and academics who will put their own parochial interests ahead of the interests of consumers.

Too bad we can’t bury their ideas in wool.

Posted by Gerry Nicholls at 2:52 PM

Despite my frequent comments on the subject, I've never been agains the new world order, just the how and the when. (real conservative)