What Makes for an Effective Political Billboard Ad

Call me old fashioned but in this day and age of fancy, smancy, high tech communication, I still have a soft spot for billboard ads.

Yes, I know, many people regard them as urban blight, but to me  good billboard ads are like art- they are creative, they generate an emotional reaction and they can be a fun way to get out a political message.

So what makes for a good billboard ad?

Well, one way to answer that question is to look at a bad ad. 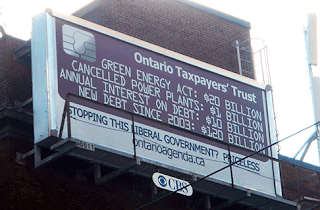 Unfortunately, it doesn't work on any level.

First off, what's its take away message?

All a passer by would see when looking at this billboard is a bunch of big numbers.

And yes I know the implied message here is these are examples of Liberal misspending. But as a casual observer, how am I supposed to know that? Maybe I have never heard of the "Green Energy Act". Or maybe I think  "green energy" is a good thing? And what does "annual interest on the debt" mean? What "debt" are you referring to? Federal? Provincial? What is debt? In short, the message is lost in a sea of numerical vagueness.

My point is nothing in the copy of this ad does the job of generating anger at the Liberals. Confusion maybe but not anger. It lacks the punch needed to generate an emotional response.

Nor does the format or layout of the billboard help.

It's supposed to be a "Ontario Taxpayers' Trust" credit card. At least that's my guess, because it doesn't really look like any credit card I've ever seen. Anyway, whatever it is, the visual is weak and does nothing to reinforce the ad's main message. If anything it only adds to the confusion. I mean what's that graphic supposed to be in the left hand upper corner? A credit card chip? Who knows? Who cares?

Finally, the billboard's call to action "Stopping the Liberal Government? Priceless," is supposed to be a cute take off on those ubiquitous Master Card ads. And I suppose it would be cute, had not that "priceless" line been parodied about a million times over the past ten years or so. Using it now is trite and unimaginative.

Also, why make your call to action statement a question? That weakens the ad's impact; your action call should be assertive and clear, i.e.: "Let's stop the Liberals!".

What's worse, nothing in the copy connects the Liberal government to the numbers cited in the ad. It rests on the observer to make that connection. That's a big mistake. You can't count on a viewer to understand what you mean. That's why a good billboard ad (or any political ad for that matter) hammers you over the head with its message. There's no room for subtlety.

After all, when it comes to billboards you only have a few seconds to  make your case before a honking horn or a good-looking pedestrian distracts the viewer.

The bottom line, in other words, is a billboard ad needs to convey information that people can absorb with just a glance.

Yes, I know that isn't easy. But it can be done.

To show you what I mean,  here's a billboard ad I created back in the mid 1990s as part of a media campaign designed to oppose then Ontario Premier Bob Rae's economic policies. 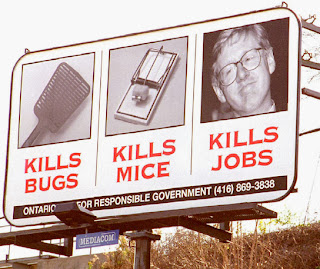 It's simple; it's direct; it's even a little funny. The point is anybody walking by this billboard would get the message. (As an aside, this billboard attracted lots of media attention precisely because it was so effective, which helped to generate even more news about our cause.)

Here's another billboard I created as part of a campaign opposing the Canadian Wheat Board monopoly.

"Goodale" by the way referred to Ralph Goodale, who at the time this billboard came out was the Liberal cabinet minister in charge of the Wheat Board. He was a high-profile minister and well known in Regina, where this ad appeared, so people seeing the ad would likely know the name.

Anyway, my point is billboards can be an effective communication tool for an advocacy group, and I would urge the NCC to do more of them.

They just need to do a better job of it.
Posted by Gerry Nicholls at 12:36 PM

One of the reason the NCC no longer get my money. gs